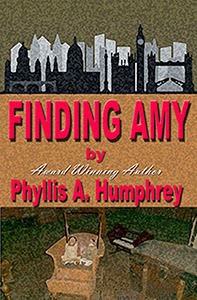 I’m thrilled to announce my newest book has just been sent to Amazon. It’s FINDING AMY and is romantic-suspense. It’s also longer than most of my other books, so the e-book will be $3.99 instead of $2.99. Still a bargain for almost 300 pages.

Speaking of bargains, I’m thinking of putting it on KDP Select for 90 days, five of which will see the price at zero. You can wait for that - I’ll announce which days are free on this Blog - or, if you prefer trade paper, I’ll send you an autographed copy for $15 including shipping, and  also send you a free digital version.

FINDING AMY has been rewritten several times - always trying to improve it - but never found a home with the Big-5 publishers, so I’ve given it to my small press friends at Criterion House.

The story is set mostly in London, with a quick trip to Paris where my characters are arrested by the French gendarmes! Whoops, I just revealed a part of the plot. It also contains a jeweled necklace, a break-in at the heroine’s bed-and-breakfast, and a kidnapping. I had such fun writing all that. Plus romance. I did mention the handsome hero, didn’t I?

He followed her, the clean masculine scent of him mingling with the library's smell of furniture polish and old leather. “And what work keeps you away?”
“I’m in business, and you don’t really want to know the boring details.”
"But here you are now, regrettably the non-owner of Gilmore Manor.” He paused. "Yet you did inherit something. A trunk in the attic sounds positively mysterious."
"You mean I might find an old skeleton inside?"
"Let's hope not. But aren't you anxious to find out?"
"Not much. I doubt I’ve been given the Crown Jewels."

Some years ago, my husband had to go to London on business (and to get an award) and I went along. My grandfather emigrated to the U.S. from England before my father was born, so, while there, I visited a relative of his and was treated to a home-cooked meal of lamb, Yorkshire pudding and tart. In addition, we did a lot of tourist things, some of which found their way into the book. During the succeeding years, we took several more trips “across the pond” to visit British friends who had once lived here in the States.

We visited the National Gallery, Big Ben, and Parliament and rode on the top of a red double-decker bus. We were there in late October and attended a great neighborhood Halloween party which, however, did not get into FINDING AMY.

As I write this, I’m getting nostalgic, so it must be time to go to England again. Or Australia. I haven’t been there and perhaps there’s a book set there waiting to be written. After all, look what happened after I visited France, Italy and the Bahamas.

Speak to me! I'm listening!