It’s all English, thank goodness. According to what I read recently, when we split from the British in the 17th century, there was talk of changing our official language to German. Nevertheless, what remains of our attempts to modernize it, has still left us with differences which I, for one, find charming.

I may not write “colour” for “color,” or “honour” for “honor,” since I agree the Norman conquerors should never have left those useless “u”s behind, but I don‘t have any trouble understanding when I encounter them in U.K. published books. However, I’m half English, so perhaps that explains my willingness to accept their spelling and even use some British versions myself.

For instance, I’ve always spelled “theater” as “theatre,” and prefer “grey” to “gray,” but “colonize” instead of “colonise.”

My grandfather, John Ashworth, emigrated to the U.S. in the late 19th century on board the New York. As I remarked in the blurb on the back of my Titanic novel, COLD APRIL, that ship was the one which almost collided with Titanic leaving Southhampton on April 10, 1912. My father’s sister, Eva, married another Englishman, James Shallcross, so I used that name for my COLD APRIL female character.

Therefore, my father was Richard Ashworth and I was Phyllis Ashworth (usually just “Phyll”) at school. In fact, my father having passed on by that time, I used the author name “Phyll Ashworth,” on my very first novel, the 400-page mainstream tome CHOICES.

Many years ago, on my first visit to England, I met one of my father’s cousins who still lived there. Plus, due to a lovely English couple who moved here for several years while the husband worked at United Air Lines with my husband, we have British friends. Corresponding with them, plus reading all those British mysteries growing up, and watching British sitcoms every Saturday night, established my habit of mixing spellings with abandon. And I shall go on doing so in spite of my computer putting squiggly red lines under them.

* * *
I’m off for a two-week Christmas vacation. Happy Holidays to you.
4 comments: 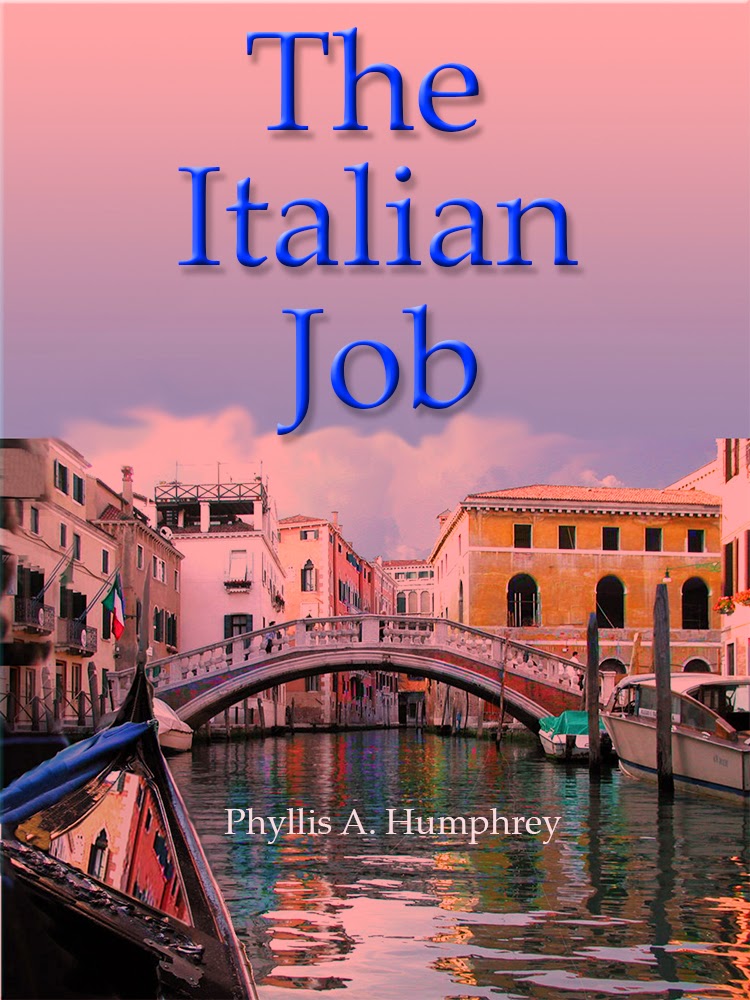 Some of you may remember when this book was originally published in the spring of 2013. I chose a small press, named 5Prince, and they were very nice and efficient. However, my ideas for promotion were different from theirs, so we parted amiably and I got my rights back.

This version has a different cover - although also of Venice - because the cover design belongs to the artist, but the text inside is exactly the same. My current publisher is the one who has done most of my books, and the price is the same as those, $2.99 for the e-book. As you know, I recently offered it free for five days; but if you didn’t get a copy then, here’s your chance.

The novel sat in my computer for a long time before the spring of 2013, while I rethought it and rewrote it, and I finally decided it was time to put it out in the world. There’s also a trade paperback version, and I’m happy to say I sold several copies at the recent Arts & Crafts Fair in the community where I live.

The story is based on the trip to Italy that my husband and I took several years ago. At that time we had a neighbor who was a travel agent and - at a neighborhood get-together - she and I discussed such a trip. I told her we’d been on a couple of tours of Europe that involved a large bus (excuse me, “motor coach,”) and I didn’t want to do that again. She suggested a small tour, only ten people and a guide, using a van, not a bus. To make a long story short, she arranged it for us, my husband added a few more cities to the “Rome, Florence, and Venice” itinerary and off we went.

The van, the tour guide and those cities all appear in my novel. Even the gondola ride, although my husband shared it with me, not the man the book’s heroine met ten days before. Several other things actually happened and found their way into the story. For instance, we did go into the Rome church that has Christ’s manger. And I said it looked like a soup tureen, and we  laughed so hard we made a hasty exit.

When forming a plot for my characters, I often ask myself “what if?” so there was no divorcee with a teen-age daughter on our real tour, and therefore no accusation of molestation. But we did go to Lake Como (and maybe we passed George Clooney’s villa when we crossed the lake) and saw Bennett’s supermarket. Wow! Just Wow!

So, although fiction outweighs the facts in my novel, I hope you enjoy the scenery so much you want to go there yourself, and that the ending satisfies your romantic longings.  Happy reading.
2 comments: