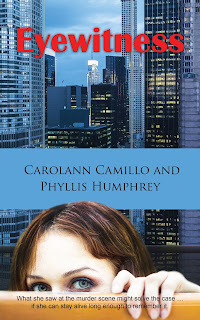 Hot on the heels of my cozy mystery, DEAD IN THE WATER, released on October 6, comes a woman-in-jeopardy mystery, EYEWITNESS, released on October 15. These aren’t self-published. DITW is from Gemma Halliday Publishing, and EYEWITNESS from Camel Press, a division of Coffeetown Press in Seattle. Another difference is that, although my name is on both books, EYEWITNESS was written with my long-time friend Carole, who writes under the pen-name Carolann Camillo.

A big similarity in the two books, however, is that both were originally written many years ago, but only now found the right publisher. So I get to repeat what I said last week: “Persistence Pays.” This book went out 52 times since 2003 when I moved to Palm Desert and kept track on 3 x 5 cards. No, not 52 different publishers: some lucky companies got to see (and reject) it more than once. Eight of the publishers are no longer in business.

However, it wasn’t all sadness and gloom. We actually received three separate contracts before the one we accepted. The first loved our story but wanted us to add “four or five steamy sex scenes.” We actually wrote one as a sample, but their idea of “steamy” was apparently vastly different from ours. The second contract was withdrawn by the publisher due to a misunderstanding between an editor and me. (I take the blame for that, but I’m withholding publisher names to avoid anyone’s embarrassment.) Number three publisher “loved” our book, but her editor apparently did not. Said editor requested changes on 300 of the book’s 350 typewritten pages. We politely declined to rewrite that much.

In case you noticed, this is the second book Carole and I wrote together to be published. SOUTHERN STAR started as an Avalon Book, and when they sold the company to Amazon, it ended up a Montlake Romance.  Stay tuned for news about the third one we wrote back when I still lived in San Francisco. That one has been rejected 46 times, and only 6 publishers are no longer in business, so we haven’t given up yet.

After 20 years of writing romance, both Carole and I are thrilled to be writing mystery because we both prefer to read mystery and have each had success with romantic-suspense. I also like self-publishing, and may do more, but there were good reasons to look for a traditional house for these two latest novels, and, so far, I’m really glad I did. Plus I like the covers they chose.

Speak to me! I'm listening!